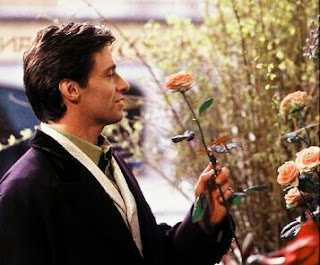 A girl under five feet five might prefer a small arrangement to be worn on her back décolletage, rather than one to be crushed at the waist or on the shoulder during dancing or a tiny nosegay to pin to her gloves or bag. Tall girls can stand the big impressive corsages men love to buy, but little girls often abhor them.


Men... In the sending of flowers, confused, they buy something expensive and therefore, they believe, impressive, but it may be quite unsuitable to the occasion or to the costume the girl is wearing. A corsage of purple orchids looks foolish at a football game, whereas a shaggy chrysanthemum, a bunch of violets, or orange calendula, or even a charmingly arranged spray of bittersweet would be in tune with her sport coat, lap rug, and stadium boots. A woman is much more impressed when her escort makes an effort to find out what kind of flowers she would prefer to wear than if he just leaves it up to the florist.


If a man can't determine for himself whether a girl is the orchid or gardenia type and can't bring himself to ask her what she plans to wear, he is safe in sending white flowers — lilies of the valley, gardenias, chrysanthemums (for daytime wear), rosebuds (but they are perishable for an evening of dancing), carnations in a tight little round bouquet. But he should be careful not to have so many flowers in the corsage that a delicate gown will be pulled out of place by the weight of it. And for a short girl, never, under any circumstances, should a corsage of more than one or two orchids be sent. A girl with taste and a taste for orchids would prefer one little green, yellow, or white spray orchid to half a dozen ostentatious purple ones. But, orchids or cornflowers, corsages should be free of ribbon trimming, and rose corsages should not have any greenery but their own as background.

Flowers are worn various ways with evening clothes. (If they are to be worn on the shoulder for dancing, the right shoulder keeps them fresh longer. ) A girl with braids or a chignon might prefer a red or pink camellia or a single gardenia for her hair rather than a corsage. A girl under five feet five might prefer a small arrangement to be worn on her back décolletage, rather than one to be crushed at the waist or on the shoulder during dancing or a tiny nosegay to pin to her gloves or bag. Tall girls can stand the big impressive corsages men love to buy, but little girls often abhor them.

Flowers should be arranged in corsages so that they will be worn the way they grow, with the heads up. They should be sent with several florist's pins so they can be anchored firmly in place. Bouquets of flowers should always be sent with some thought of where and how they will be arranged. Several dozen towering dahlias, chrysanthemums, or gladiolus, sans container, will not always be welcome in a hotel room, in the compartment of a train, or aboard ship, in anything less than a suite. A potted plant is impractical for a transient.

Flowers corsages or arm bouquets sent to trains and planes are usually just a burden to the recipient. It is a very nice thing, however, to send flowers for decoration to a girl who is giving a party. I once knew a charming gentleman with imagination enough to do that. He filled my apartment with flowers the afternoon I was giving a large cocktail party and sent along his Filipino butler, too, to help out.

A man who is laying siege to a girl's heart does well not to systematize his flower-sending. I knew one man who could be counted on to send two dozen long-stemmed red roses every Saturday, rain or shine. And another who might send a gay, red geranium in a simple clay pot or turn up with a single gardenia in a twist of green waxed paper or a new recording or some fresh catnip for the kitten one never knew. Any woman could tell in a minute which was the more interesting man. — The Courier-Journal from Louisville, Kentucky, 1953

Etiquette Enthusiast, Maura J Graber, is the Site Editor for the Etiquipedia© Etiquette Encyclopedia
Posted by Etiquipedia at 2:48 AM