Etiquette and Title Hunters of the Gilded Age 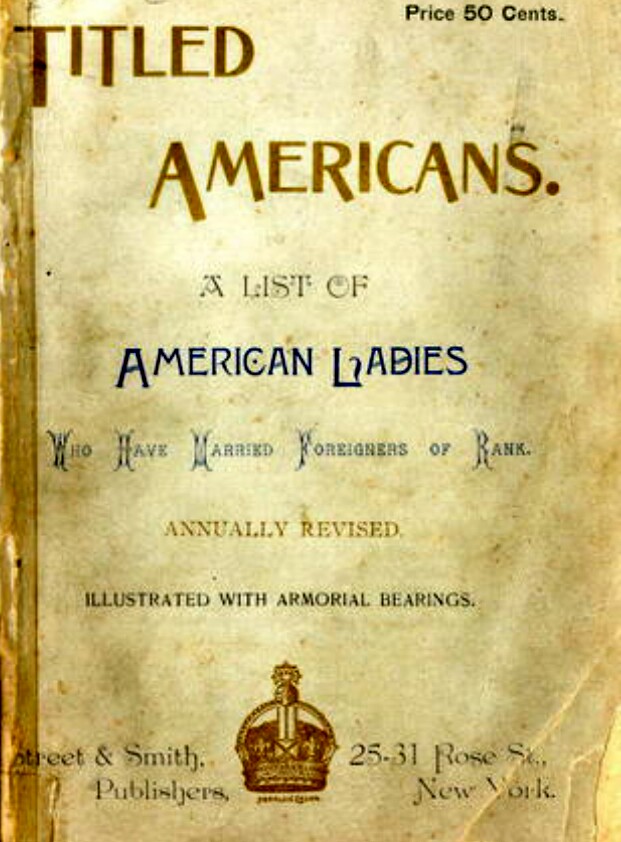 "These matters are beautifully managed in the States. No wonder that an English husband finds it difficult to act up to the etiquette of such a position!"– From "Rita," in New York Times, 1910

"Transatlantic matches became so much the rage among the newly rich that a whole industry sprang up to serve their needs, including professional matchmakers and magazines. Typically, the American heiress would start by consulting the quarterly publication The Titled American: a list of American ladies who have married foreigners of rank. This contained a register of all the eligible titled bachelors still on the market, with a handy description of their age, accomplishments and prospects – for example:


'The Marquess of Winchester is the fifteenth Marquess and Premier Marquess in the Peerage of Great Britain. He is also the Hereditary Bearer of the Cap of Maintenance. The entailed estates amount to 4,700 acres, yielding an income of $22,000. He is 32 years of age, and a captain of the Coldstream Guards. Family seat: Amport House, Hampshire.' From "The Titled American" No 2, March 1890

This 19th-century version of match.com was in great demand in the Fifth Avenue and Newport mansions where these American heiresses lived. Many came from families whose wealth was very recent, and who were desperate to stand out in a famously snobbish New York society where mere money was no guarantee of acceptance. The upper echelon, known famously as The Four Hundred, was based on the number of people who could fit comfortably into Mrs Astor’s ballroom – Mrs Astor being the most powerful woman in New York society on account of both her breeding and her fabulous wealth." –Daisy Goodwin, Cash for Titles: The Billion-Dollar Ladies, for Daily Mail Online


Etiquette Enthusiast, Maura J .Graber, is the Editor and Site Moderator for Etiquipedia© Etiquette Encyclopedia
Posted by Etiquipedia at 11:55 PM