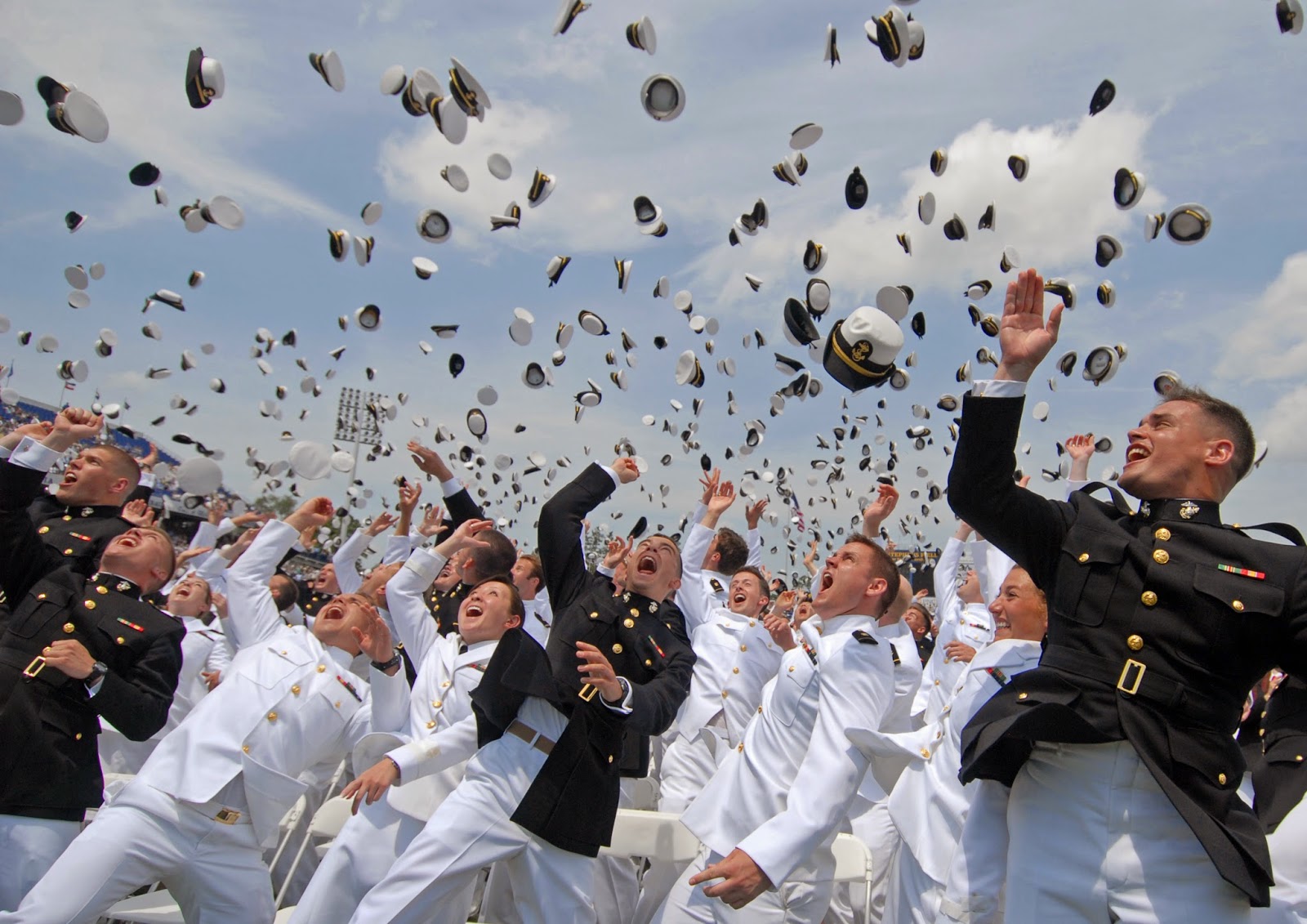 THE FORMAL DINNER.  As the name implies, the most complex of dinner parties, the formal dinner party, is to be conducted.  During the cocktail or informal period each participant examines the seating chart to determine the location of his place at the table. When the serving of dinner is sounded and announced, the Presiding Officer and his most senior guest proceed to the dining room first, followed by other guests with no order of precedence.  Each place will be marked by individual place cards. Seats will not be taken until permission to do so has been announced.

a.  The place setting will be set up by the Club.  Only coordination is required—be sure to specify exactly what is required.

b.  Once seated, engage in conversation with those individuals nearby.  Each person will find before him a place setting similar to the one shown at Figure 1. Folded on top of the plate is a dinner napkin.  On the left of your plate you will find, from left to right, a fish fork, meat fork, and salad fork. On the right side of the plate you will find, from right to left, an oyster fork, soup spoon, fish knife, meat knife, and salad knife.  Located to the upper right wide of the setting will be the glasses.  They are identified as follows, from left to right:  water glass, white and red wine glass.  Directly in front of the plate you may find either a menu card and/or name card.  It is customary for the servants to remove each set of knives and forks, used or unused, and each glass as the course for which they were set is finished.  A service plate will be part of the table setting, but it is not intended for use.  A butter plate is provided when served bread, lay it on the butter plate.

c. No more than three forks (not counting the oyster fork) and three knives are placed on the table when it is set.

d. The type wine glass depends upon the menu, but their arrangement will be according to size so that the small ones are not hidden behind large ones.  The water glass is placed directly above the knives or to the right of the plate; in front of this glass is the red wine glass and the white wine glass.  The glasses are placed in a straight row slanting downward from the water glass at the upper left.

a.  Selection of Silver.  Silver is arranged to allow use of utensils farthest from the plate first, so take the next item in order with each succeeding course.

c. Use of the Knife.  Do not place the knife on the table once you have used it.  When you have finished with the knife, never place the handle on the table with the blade resting on the plate, simply place it on the upper right rim of the plate with the blade resting on the plate. Use your knife for cutting salad only when iceberg lettuce has been served.  (All other salads are cut with the fork only).

e. Chicken and Other Fowl.  At a formal dinner no part of the bird is picked up with your fingers.  Hold the meat on your plate with the fork and strip off the meat with your knife.  (Frog lets are eaten in the same fashion.)

f. Olive Pits, Seeds, and Fishbones.  Remove pits, seeds, or bones from the mouth with the thumb and forefinger and place them to one side of your dinner plate.

g. Long-Stemmed Glasses.  Long-stemmed water glasses or wine glasses are held with the thumb and first two fingers of your right hand at the base of the bowl or on the stem.  Do not hold the bowl of the glasses.

h. Fresh Fruits.  Halve, quarter, stone the fruit with the knife and fork, but with the exception peaches do not skin it.  The fruit is then eaten with a fork.  Fresh grapes and cherries are eaten whole; pits removed with the fingers and inconspicuously placed on the side of the plate. Grapefruits and oranges are served in halves.  They are never squeezed, but are eaten with a fruit spoon or teaspoon. 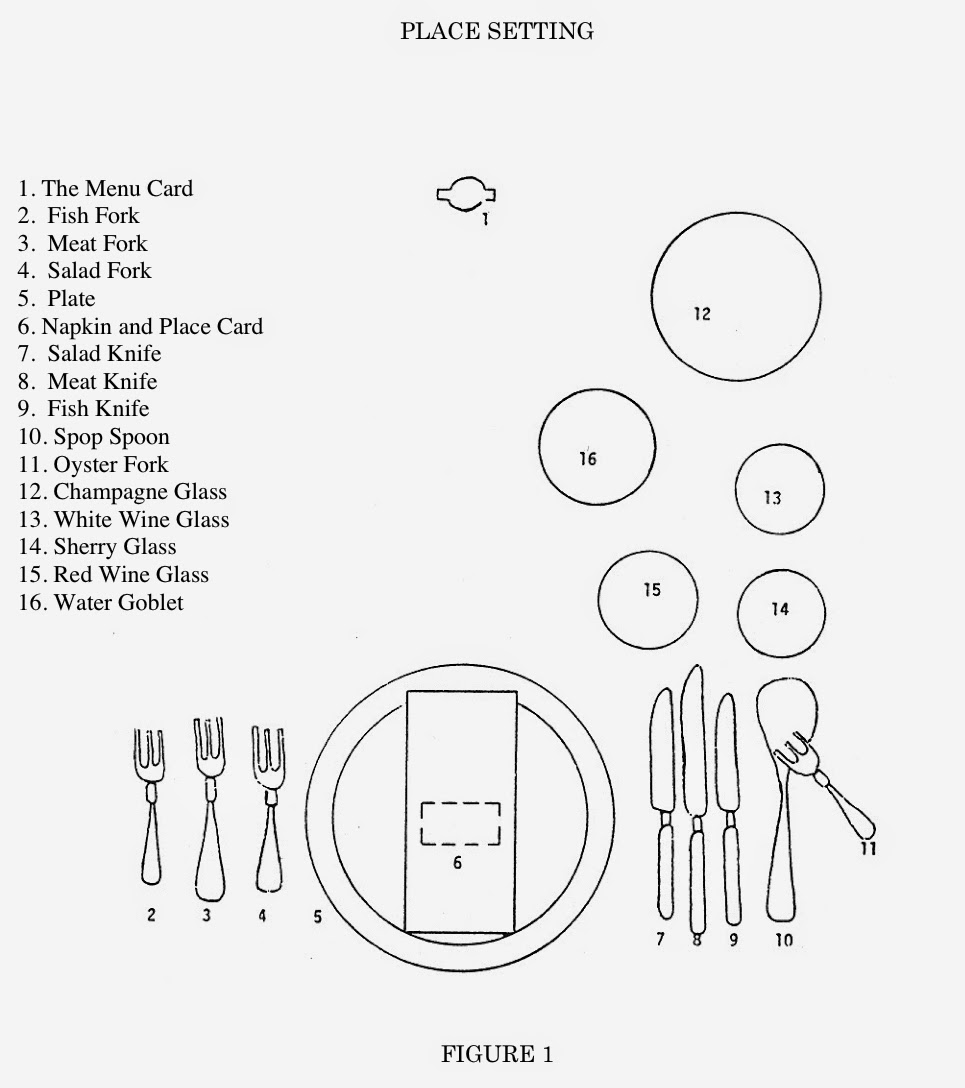 =
Place Setting Image and Etiquette from the "Military Field Circular for Dining In" Fort Benning, Georgia

"Why Are They Called 'Mess Halls' & 'Mess Kits' in the Military?"

When referencing food and the military, I am frequently asked the same questions by students. “Why does the military give out mess kits?”, and “Why is the place where soldiers eat called a mess hall?” I am a person who needs answers that add up. Inquisitive kids are that way too.

When I first started looking around for an answer back in the early 1990s, I found a few bits and pieces of information available, but not one source I read actually tied it all together to where it made sense to me.

From the outset “mess” obviously meant “food” and nothing more. The biblical Essau had a “mess of potage” which is believed to be a portion of lentil soup or beans. While growing up my brothers had G I Joe action figures that came with “mess kits” and watching the “Beverly Hillbillies” on television I heard the term “mess a’vittles” frequently used. While listening to former Presidential aide Dee Dee Meyers talking on late night t.v. she referred to her “mess bill” for something she had eaten on Air Force One. It was starting to drive me a bit nuts. If “mess” historically had meant food, how, why and when did it become the definitive term for a state of confusion and disorderliness?

It took me much sleuthing, but I finally found a very old book on word origins and voila… there was an answer that made sense. The change in the general public’s definition of the word apparently was in the 1590s, when a party game called “Muss” spread across Europe. Muss was a game in which trinkets were tossed around a room and the party guests would scramble to retrieve them (anyone for some 52 pickup?)   As popularity of the game spread throughout Europe, with its various languages, the name of the game somehow was changed to “Mess”.   The Bible, military handbooks, and all other writings had naturally been left with the original meaning of the word intact. But from that point on, “muss” has rarely been used as a common term for something in a state of disarray, other than regionally in a few parts of the world.

Many southern states here in the U.S. are one such regional area.   The term "muss" is still used in the south, while I rarely hear it here in Southern California.  The eyes of an octogenarian attending one of my seminars became misty as he recounted how his grandmother in Alabama would scold him for wearing his hat in her home. “I would say that my hair was a mess underneath my hat. She would then correct me by saying, ‘Your hair is mussed. It is not a mess!”

Now I always try to remember that my daughter’s room is not a mess.  Her room is simply mussed up. It sounds better and somehow makes me feel a bit better about it. From Maura Graber, The RSVP Institute of Etiquette