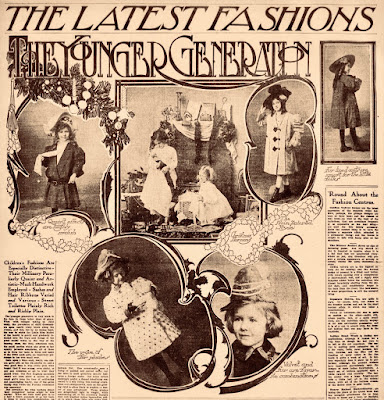 Any attempt at overdressing is at once frowned upon by wealthy mothers of today, and it would surprise many a poor mother to see the garments that the rich children, whose inheritances are matters of almost national gossip, wear habitually. Plainness, when it does not mean ugliness, is what is insisted upon!

The small child of today begins her social education when she is six or eight years old by going to the juvenile dancing or gymnasium class. A most successful Swedish teacher in New York, who has the names of many prospective little millionaires on her books, says that she endeavors to teach her small charges that they must strive to do as she instructs because they are gentlewomen, and that being gentlewomen, they cannot possibly be guilty of the many breaches of manners and decorum that are all too often indulged in by heedless childhood.

At the gymnasium, a little bloomer suit of white Henrietta or cashmere or mohair is worn, with white stockings and white canvas rubber-soled shoes. Boys and girls stand side by side and learn the same exercises, and the nursery maids stand outside and follow the lesson throughout, so that they may intelligently aid the little pupils in practice at home. The dancing class is a part of the regulation gymnasium curriculum, aud such of the little folks whose parents desire it are taught solo dances, which really bring out quite a little of the child's personality.

At an entertainment where children undertook all of the performance, one little girl appeared in a dance and chorus which did not take very well, and so was not encored. At its conclusion she betook herself to her mother's box and watched the part in which her cousin appeared. This was wildly encored, and the mother feared that her small daughter's feelings might be hurt. But the little one smiled and said: "What do you think, mother; they made Maisie's class do their dance three times over. I guess they did not do it quite right the first time, and so they had to do it over again.

Very quickly do the youngsters nowadays appreciate what is good form in dress and other matters. Any attempt at overdressing is at once frowned upon by wealthy mothers of today, and it would surprise many a poor mother to see the garments that the rich children, whose inheritances are matters of almost national gossip, wear habitually. Plainness, when it does not mean ugliness, is what is insisted upon.

For the dancing school the favored style is a fine lingerie frock, with delicately tinted or white hair ribbon, and sometimes a sash. Either white or black silk stockings aud black patent leather slippers are worn, colored footwear being considered in very poor taste. Colored silk stockings or slips are permitted only to girls who have seen at least a dozen summers: they are supposed to find no place whatsoever in the wardrobe of her younger sister. – Los Angeles Herald, 1906

Etiquette Enthusiast, Maura J Graber, is the Site Editor for the Etiquipedia© Etiquette Encyclopedia
Posted by Etiquipedia at 11:38 PM